So I'm going to combine my two blogs(yes I have TWO!! And I don't write on either!!!) into one, so that this blog shall also be about my crafting exploits.. which lets face it are just little hobbies that I do to turn my house into more of a home! So, to kick off: 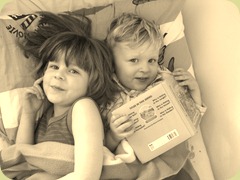 (that’s her on the left, looking beautiful, next to her gorgeous bro Lewis.)
it's been a birthday couple of weeks in our house; my little baby Madeline Arabella(that’s her on the left, looking beautiful, next to her gorgeous bro Lewis.)  turned FIVE last Tuesday, and we've been partying every day since! On Tuesday we cooked pancakes for breakfast and sent her off to kindy, and then had a big family hoo-haa at Dennys that evening(why Dennys? it's cheap, it has chicken nuggets, it can fit 14 adults and 2 kids into a booth, and it's NOT McDonalds) for prezzies etc. And then the party of all parties on Sunday(today).  And my girl did AMAZINGLY(too many capitals, I know)at all of the events!
NB: If you've been reading this blog for a while, or you know me personally, you'll know that Maddy is autistic... read old posts for details... and this meant that there was more pressure and anxiety around her birthday than could be even imagined! For quite a while we had tears and heartache over the fact that she was turning 5 not 6(she really really wanted to skip to 6), and also major confusion about what was happening after her birthday; like other similarly cool kids Maddy will stay on at kindy for probably another term, until she gets more steady on her own two feet. So it was taking a lot of emotional energy just to convince Maddy that a) five was not an age that could be bypassed and that that was ok and b) that she was staying at kindy, not disappearing forever into the unknown 'school', into which many children she knew had seemingly been whisked. But, at the end of the day, she turned 5, quite willingly, and is, to all appearances, not afraid of the big bad future, which is quite something for any of us, let alone those who have a few more anxieties and burdens on their hearts.
So meanwhile I continued to plan and prepare for Maddy's birthday excitement, including fashioning a dinosaur hood et al for the birthday girl, which is something that I should have done a long time ago - she has been obssessed with dinosaurs for 3 years now! I could not find satisfactory pieces in our price range, so hopped aboard the good ship Etsy for some inspiration. And found this Awesome Black Dragon Hood. I'm not very good at copying and pasting, so go to the darn link yourself. I hummed and haahed, and finally started sketching some ideas of how to create it, then started making templates. Maddy patiently stood while I held crude paper shades to her head and noted measurements. I tweaked, and tried, and tweaked again, and finally the pattern was good to go. 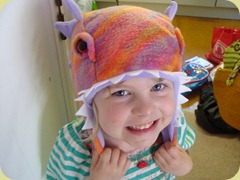 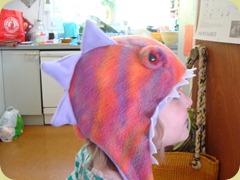 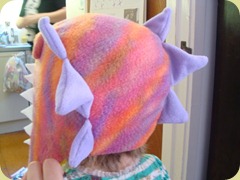 Then after the hood was done, and accepted graciously by the client, I had a go at claws and a tail, which worked fine, apart from this: 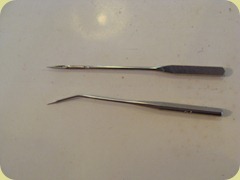 Yes, that’s a normal sewing machine needle, right next to the one the fleece munted. It just saw the rainbow layers, said “HELlo!” and tried to get the heck out of there(curse your layers and layers of fleece).
So that was my sewing bits and pieces, but I thought I'd add in pics of the little goodies bags I packed for the party, each one containing a balloon, a wee bag of dinosaur lollies, a mini puzzle, a party-popper(yes, a minor explosive device) and other bits and pieces. Basically, a goodie bag is where you put all the stuff that you don't want the kids to have AT your party.... So then I grabbed some little party bags from Borders, $13.50 for 12, and tied them with a cute ribbon. Ta Da! 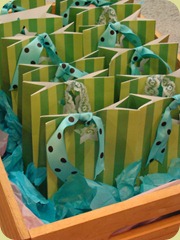 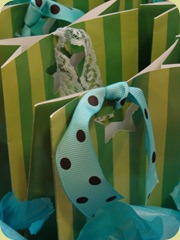 There you go, a post about crafting and about life. What more could you want?
Posted by Rachel Osborne at 8:45 PM