It can sometimes be difficult to tell if things are ok or not. Just as you can not judge a book by it's cover(although I often do), you can't judge how other people are faring by how they appear. This can be frustrating. What can be even more frustrating is not knowing how you yourself are doing. Despite intimate knowledge of one's own self, what may seem blindingly obvious can lead you astray... Confused yet? I know I am! I'm having trouble even making my mind up on what I want to say!
I suppose what I'm attempting to put into prose is that troubling feeling where you wake up every morning and lie still for a few minutes, mentally poking around your head to see if everything is as it should be.... that uncomfortable 5 minutes after your shower when you stare at your own face in the mirror, and try to observe it as an onlooker... How do I look to other people? Do I look ok? Am I going crazy? If I saw myself walking down the street, would I be worried? 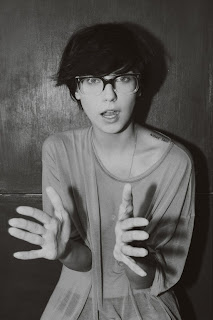 I mean... does she look worried?

A few nights ago, I had myself pretty convinced that I was Depressed. That was it, I decided, I'd hit the wall. I started to make an internal list, a list of things that showed that I was unwell. And yet, the next day I was fine. I woke up without the crying-bender-hangover, and I wasn't worried about how I would get through the day. I looked at the email I'd composed to a couple of friends the night before, alerting them to my Depressed-ness. And I didn't feel that way any more. And I realised that this in itself showed that I was not, in fact, Depressed. Stressed, maybe, Overwhelmed? Quite likely. But if I was Depressed, that morning-after would have been cloaked in cloud, a headache already forming on my temple, and a knot of panic in my stomach as I contemplated the oncoming hours. And it wasn't. So I started to make another internal list, of things that showed that I was OK.  And in the days that have followed, I've looked from list to list, with my mouth open, like a clown at the fair, and I've wavered.

I really don't know if I'm ok. But I really don't know that I'm not ok. I talked to one friend, in the midst of my crying jag, who of course heard the worst of my stress and anger, and whose phone receiver must have felt wet with my howling tears, and she said to me: You're depressed Rachel! get help! Call your doctor tomorrow, get referred to Maternal Mental Health. Tell other friends, so that they know! And she was so right to say all those things right then. She was making sure, with her oodles of wisdom and life-experience and instinct, that I was not disappearing. She wanted to know that I would take action. I promised I would.
But I haven't. Because I felt fine the next day, and I looked back at the day I'd been through, and I knew it had been shite. As in, a shite day for anyone, let alone someone who is prone to mental fragility. And my husband, who had held me the night before and wiped my tears and ignored my sniffing, said that yes, it had been an awful day, and I was actually doing great. I wasn't a wreck after all! And my grandmother, with whom I spent all of yesterday with, listened to me vent about everything that was going on, and said to me that I was doing extraordinarily well with all the things going on, and that I was a wonderful mother, and that I was so different to how I'd been last time. Different. Josh said the same to me. He said, it's not like last time, not even close. Do you even REMEMBER last time? He asked.
Remember? Yes, I remember. And it's not like that... not yet. But how do I prevent it from becoming like that? I need to build my dam now, before there's a chance of flooding. I need to ask for help, and I need to keep mentally poking myself each morning, checking all my bits, making sure nothing faded in the night, making sure there aren't shadows and dust in the corners... And I need to ask for help. Which is hard, because I then have to choose who to ask carefully(no matter how much someone loves you, the way that they want to help may not be appropriate), and I have to ask them in person. It's all very well blogging about things, but no one reads a friend's blog, and thinks, Gracious! I need to ring Bob! 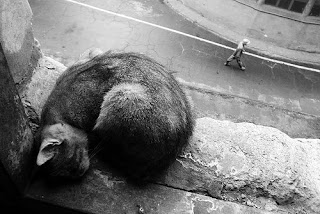 But part of me just wants to hunker down and sit tight, to curl up like a cat against the weather, and just.... be safe. Not risk human interaction, nor circumstances beyond my control, that might punch holes in my wall. Part of my almost-Depressed-ness is a vulnerability to imagined insults, which means that I currently feel left-out and hurt by any number of good friends who did nothing wrong except continuing on with their lives while I stopped and checked the sky for the gathering storm clouds.
That's enough metaphors and poetry for one day.
If you don't hear from me, don't take it personally... I'm all hunkered down, trying to avoid the storm. Stay safe out there my peeps, it's cold... 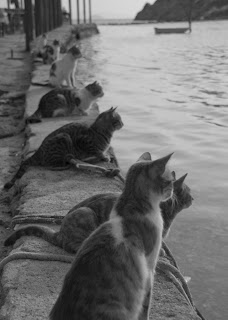 Posted by Rachel Osborne at 7:28 PM

Email ThisBlogThis!Share to TwitterShare to FacebookShare to Pinterest
Categories: Crazy