Well, I thought I'd share what I've been doing this rainy, grey Sunday... to start with I was grumpy and sore, and feeling so overwhelmed with the amount of housework that I have to do, that I could not even move off the couch. Apart from the usual amount building up of washing and dishes etc, I still have a whole room full of junk to sort out, and other rooms to tidy... Anyway I did a big load of dishes(all those STOOPID dishes that can't go in the dishwasher because they're too precious or too BIG), all the time feeling very sore and sorry-for-myself... then I made Josh and I another coffee(I haven't been drinking coffee much lately, not because I think it is terrible to drink coffee while pregnant, but because I just haven't felt like it... weird ay!), and sat down and finished my half-read Frankie magazine. Thank goodness for Frankie. It saved me. By the end of it I had remembered my aim to tidy/slightly rearrange our bedroom, and had some motivation stirring. So I did it. Here it is:
The problem: I thought our bedside tables were naff. They just didn't fit with my aesthetic ideals, and thus constantly bugged me. Also, heavy and impractical to lift out of the way when trying to fit a bassinet into the space beside me. I'm not sure whether our new babe will sleep in bed with me(I promise I will try harder this time to be a good co-sleeper!), or beside us in the bassinet, but either way, the annoying bedside table would have to go. Poor unloved bedside tables. 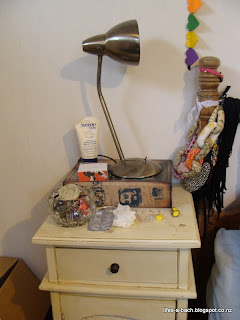 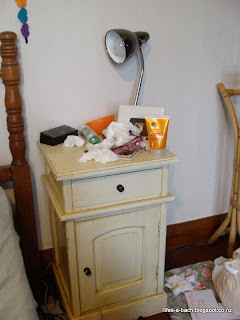 yes, a lot of tissues building up! And empty paracetamol packets...

The brief: I wanted pretty. And light/easy to move. And pretty. Josh said he absolutely needed enough storage space for books and alarm clocks and tissues and blah blah blah. 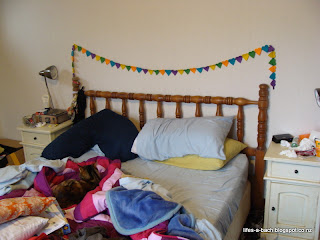 I purposely left the bed unmade, complete with cat, for the before photos, so that the after photos would look so much better! Akin to the strategy of showing a before photo of an unhappy overweight person with bad posture, and an after photo of a super-smiley tall, confident skinny person.
The solution: 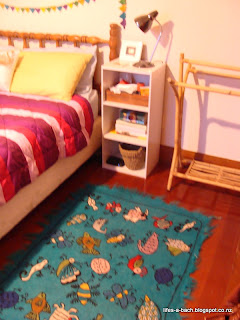 I got rid of those tables! For Josh's side of the bed, I used a handy little white mdf shelf that we bought from the Warehouse for $12 many years ago... they are so useful, it has been many many things over it's life, including sideways as a kids bookcase. I bought a wooden tray in the top so he could store all his chargers, pens, tissues, other weird stuff, and then stacked up his books and added a little basket for old tissues. Sorry about the blurry picture!
Nota Bene: that blue rug on the floor, which was about thirty bucks from Trade Aid a long time ago, is absolutely one of my Favourite Things. I wish it could go on my side of the bed, but then it would be hidden on the other side of the room, and no one would ever see it, which would be a crying shame. One day I want to hang it on the wall, but until then, there it shall sit. 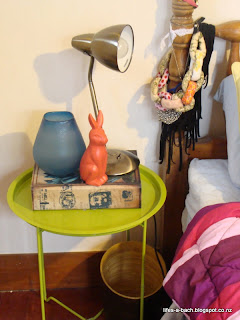 For my side of the bed, I used one of my other Favourite Things: a fold-up green table from Freedom Furniture, I think it was about $40, 6 months ago. The top is a separate tray that lifts off - handy! I wanted a vase full of fake flowers(the flowers are still to come), and basically just some prettiness. This was my first take. But the box was too big and filled up the tray, and the light was annoying me. So then I did this: 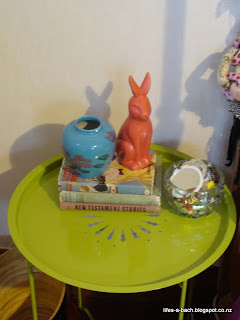 I swapped the box for some books, and the bigger vase for a smaller one. I also took off the light, and replaced it with a tall floor-standing one from the lounge(you can just see it's shadow). Then I decided the wall behind was a bit too blank, and I still needed something in which to store un-pretty things: paracetamol, face-wipes, tissues, pen & notebook etc). So I grabbed another one of my Favourite Things, which I have used occasionally as a bag, but more often like to hang it somewhere on display. I pinned it up first so I knew exactly what height it needed to hang from, and then took out the pin and banged in a bloody great big nail. Now it stores my secret things: 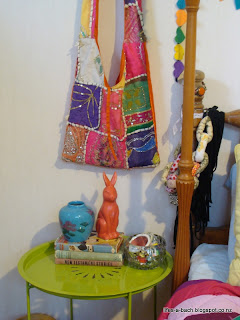 Also on the table you can see a crystal-cut bowl that stores jewellery - I always forget to take off my jewellery before I come to bed, and so need a place to plop all that precious stuff when I lie down and get poked by giant earrings or whatever. I added a little cute-ugly kitsch clock that I got from the $2 shop a while ago - being able to know what the time is so handy, but of course I haven't gotten round to actually put a battery... but the thought is there! 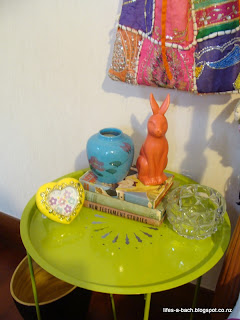 Now our bedroom is a lot more serene, and I've actually managed to tick off one of those "saw-it-on-pinterest-and-always-wanted-to-do-it" things. Yay! What things have you done this Sunday? 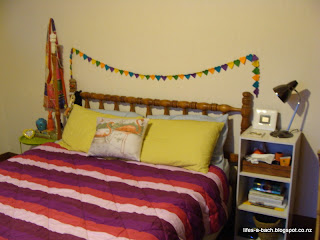 Don't forget to vote on what name you like the best, and you might win a little mushroom necklace! Night night.
Posted by Rachel Osborne at 6:12 PM

Email ThisBlogThis!Share to TwitterShare to FacebookShare to Pinterest
Categories: Crafty

This was a great use of a wet, miserable day! And hopefully, having one area of the house (particularly the sleeping space) looking good will help inspire you to work on more problematic areas!

(I tried getting one of those shelf-units for bedside tables, but was told we don't really need them. I guess not, but I'd like them!)