Skirting around the Issues

I whipped up a skirt for my 7 yr old today. I was in the middle of cutting out my new pattern, and my husband and I were trying to ignore the absolute SCREAMING and fighting going on in the living room. We genuinely thought they'd be able to figure it out, but no, the screaming got louder and louder and the accusations that were flying got worse and worse. Josh reluctantly waded into the fray, and I wished him luck and continued my paper cutting. The noise subsided slightly and then a dramatic crescendo. Josh had placed them BOTH in their room together, in time out, to see if they would realise that it was smart to quieten down. Obviously this idea was not their favourite. Now the screams were focused and had a similar purpose: MUUMMMMYYYYYY! Even though I am not a fan of Good Parent/Bad Parent, and even though Josh and I have a deal that whomsoever places the child in Time Out shall be the person whom retrieves the child from Time Out(to prevent one parent becoming the 'rescuer' and ideally(in my dreams) restoring the temporarily-broken connection between parent and child), I decided to go in and see if I could calm them down(bet you can't even remember what this sentence was about to begin with!).

I went in once to see the damage and informed them(not quietly; yes I yelled, but in this case only to be heard!) that I would come back in and listen to them if they could first calm down and stop screaming. M was actually screaming so hard that she had her hands over her mouth and L was clearly perspiring with the effort. I toddled back down the hallway, did some more cutting out and then, when the screaming had dulled down to a muffled roar, headed back in to battle. I sat down on the bottom bunk and advised them to breathe in and out, showing them how I breathed slowly in through my nose, waited, then out through my mouth. Amazingly they both made an effort to copy me, and eventually they managed to calm down. Once I had heard both sides of their tragic story(and Lo! It was terrible indeed), and repeating back to each of them what I had heard them say, I told them I was planning on doing some sewing, and did they want to come and help? Did they ever! We decided to make a skirt for M(and yes, promised to make pants or 'whatever' for L tomorrow) and she bustled around choosing some fabric(red and pink plaid) and some contrasting material for the pockets(an old pillowcase from the Sallys with retro white and blue flowers). I measured M's waist, loosely round her hips, and then we decided what length it should be(this short? she asks... um if it's that short sweetie, you will have to wear leggings underneath... ok maybe down here?... yes that's perfect!). M wrote the measurements down on a scrap of paper, with me spelling out and explaining the words: 'waist', 'hips', 'length'.

We figured out between us that we had to add onto the length measurement another 6 centimetre, 1 for the hem and 5 for the waistband elastic. M did some admirable wrestling in her head and announced the correct answer. Win! I sewed a basic rectangle, turning up the bottom 1 centimetre and hemming and turning down the top. While I sewed, I explained to L and M what the machine was doing. I showed them the spool at the top, and the bobbin in it's secret compartment. We noticed that the two threads were 'chomped' together by the machine, and I pointed out the foot and other bits and pieces. The pins were the things holding the material together neatly until it could be properly chomped together, and the foot was a car, making stitches along the road. We had to drive very straight. The kids were completely spellbound by the whole process, especially L who has many times expressed his wish to use the sewing machine(but then, he has also asked to use the breast pump, which he finds equally fascinating).
Once I had sewn the basic rectangle, we discussed pockets, and what shape they should be: Rectangles or squares? Semi-circles perhaps? Maybe a long oval? I *ahem* guided them towards favouring the square, and then off we went again. 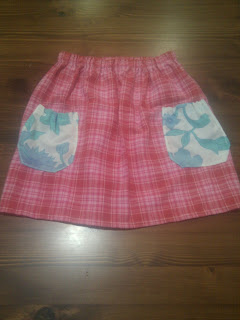 The finished product is not perfect, and I've learnt a few things about sewing little skirts for long-legged lasses, but the process was fantastic. No, I did NOT get to the bottom of who-bashed-who, and I cannot for the life of me remember what it was even about, but together we all sewed a skirt. We did some basic maths, and we learnt new words: waist, bobbin, spool, thread, hem... While we sewed we sang songs and M read out some of her old school poems, and we played with word blends.
In my opinion? For once, a good old WIN in parenting. 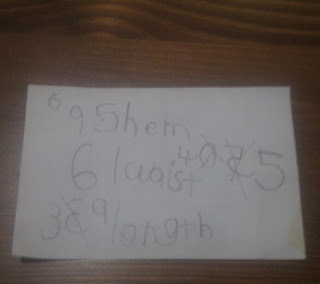 In other parenting news? L pulled my top down, shoved his face into my cleavage and sang "Spongebob Squarepants" at the top of his lungs. Dignity Fail.
Posted by Rachel Osborne at 11:42 PM

Email ThisBlogThis!Share to TwitterShare to FacebookShare to Pinterest
Categories: Offspring

Planning next bloggy get together to be at Library Cafe in Onehunga
What is best way to contact you?
I did try to send you a FB message . . . .