Cure or Cope? The Drama of Seperation Anxiety

Well my dears, I have had 3 children, and they are in bed right now. And some might say that having 3 children makes me an expert. A parenting pro. In fact, when I mention the fact that I have managed to conceive, and keep, 3 whole beings(and one darling never-to-be-forgotten-'blip'-on-the-screen), I have received many random comments, including those who would flatter me for my apparent parenting skills. So it can be somewhat humbling to realise, every-single-freaking-day, that I am still learning. In fact, some days it can feel like I am totally new to this whole 'having-children' thing. So I do not, for a second, want you to think that I think that I am better at this than you. Because I am so so so not. But we parents and caregivers are a team, are we not? And I think that sharing our newly honed skills can be a good thing. SO.
Separation Anxiety.
Dum dum DUUUUUMM!
You've heard of it, yes? In fact, you've HEARD IT. The crying, the whining, the gently escalating hum of anxious baby noises as they pick up the clues of a departure. The roar down the corridor as you flee the scene, slam the door, drop the keys, pick up the keys, rev the engine...
At times it can be flattering, a sideways glance and two fat-ringed hands reaching for you. Yes you. You're their favourite. And you know you should feel grateful that they love you. Gratified that they need you. But the crescendo of cries twists your gut, filling you with guilt, resentment, more guilt, anger, frustration, concern, a sense of feeling trapped... Oh man, I know it well.
So, separation anxiety. You've probably read a bunch about it. It's generally a good sign. They, our progeny, are strongly emotionally attached to us, their caregiver. If they didn't roar, flap their hands, toddle desperately after you, this would be a warning sign. You, Me, We, are their safe place. So first of all, give yourself a HIGH FIVE! 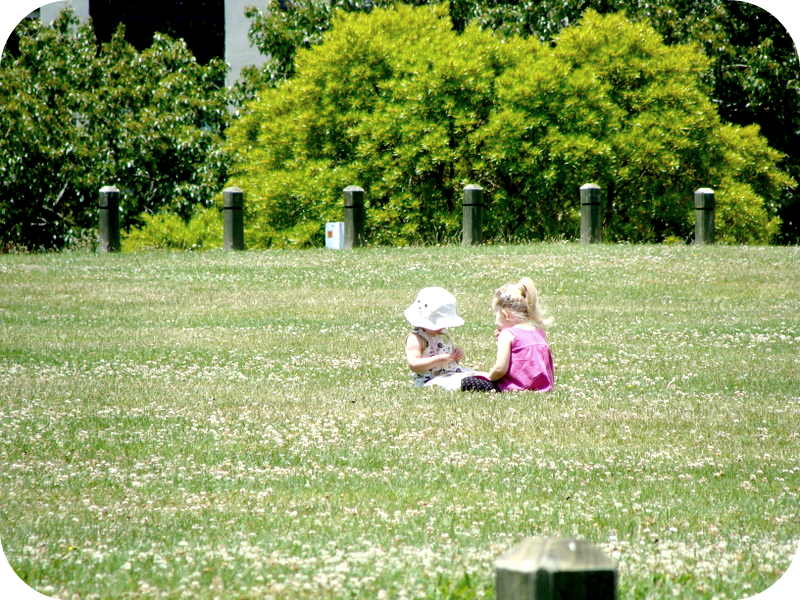 Now, how do we stop this craziness from ruining our lives?
I've had 3 different children, with 3 totally different styles of dealing with things. My eldest, M, who is now 8, would cry and cry, heartbroken sobs. Her kindy teacher, grandmother, sunday-school teacher, and whoever else was doing the awful deed would gentle peel her shuddering wiry frame off me, and would then be, in turn, in her death grip. It was utterly heart-wrenching. But M had a helper, a small white soft-toy puppy named, well, Puppy. And when I turned to leave, I would see Puppy clenched in her fist as she reached for me from beyond the bead curtain. And Puppy was there for her. In fact, at one enterprising child-care centre, a special home was made for Puppy, a much-painted and glue-spattered cardboard house, and thus M would leave me for Puppy, and then eventually, as her breathing steadied and the sobs lessened, she would leave Puppy in his lovely box, and venture forth into the sunlight. Thank goodness for Puppy! 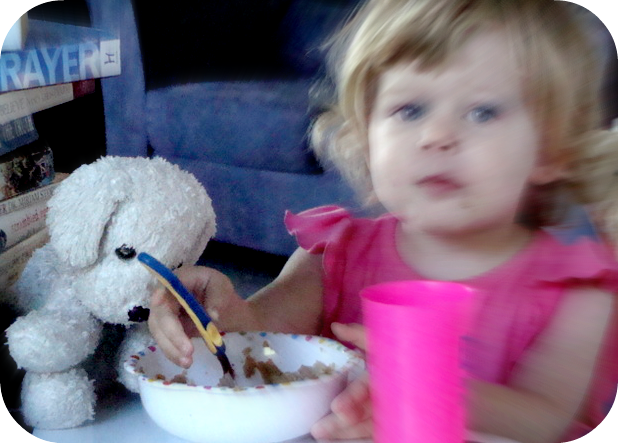 I did not cope very well with M's neediness. I felt trapped, isolated and completely alone in the task of caring for her, despite my husbands desperate attempts to reach out to us, and my depression and her depression seemed to entwine into one mass of sad girl-dom. So I would leave. I had to! I would sneak out during nap-time, leaving hubby in charge and go to the beach and sit, watching the waves for hours. Or I would point at a bird, something shiny over there, or turn on her favourite show, all to distract from the fact that I was running away. I think all of us have probably distracted, or run, or hid... and at times it is entirely necessary. I still mis-direct small people daily, just so that I can run off and speed-pee. But I don't think it's a way to cure or even to cope with Separation Anxiety.

My second child, L, who is turning 6 in a couple of months, was a different kettle of fish. He attached himself to everyone as a baby, merrily swinging from arm to arm like a hairy little chimp. I mean, yes, he wanted me more than anyone else, but if I wasn't available, he'd just make do. He went through the usual clingy stage, and then eventually progressed onto the separation anxiety. But instead of weeping for hours, he chose to instead roar angrily and tearfully when clawed from my arms, and then, as soon as I was out of the room, he was fine. Like, annoyingly, cheerfully fine. And I would be left with the memory of his tear-stained face, his red open mouth, his flailing hands.... and feel like shit for the rest of the day. And L? He would dig in sandpits, paint anything and everything, swing on tires and generally enjoy an awesome day at kindy. Him I did not distract as much, nor run from. His kindy teacher, firmly clasping his twisting roaring little body, would carry him to the kitchen window where he could see me walking away, and I would always turn at the letterbox, and wave at him, blow kisses, and walk steadfastly away. Did it make it less awful for me? No, not really. But it felt more, I don't know, honest. I wasn't tricking him. I was showing him that I, his mama, was confident that he'd be ok, and I was gifting him my final wave to show: I love you, I'm going, I'll be back. 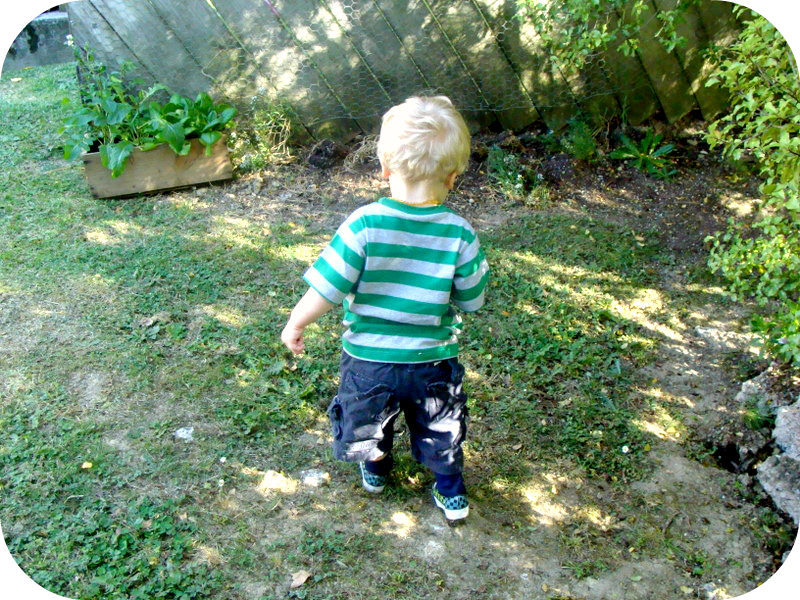 My third child, FR, is, again, a different person. Seriously, you'd think by now I'd have this sussed, right? FR was not clingy until about 12 months, a little bit late, and to tell the truth, when she did start needing ME more than HIM, I felt a bit relieved. What was this, an emotional zombie? But then she hit the big SA with a bang. I mean, big bada boom. This child can SMELL my presence, or lack of, even while sleeping... it's the hand-to-heart truth, ANY time I leave the house while she is napping during the day, no matter at what point in her sleep cycle, she lifts her head abruptly, sniffs the air like a hungry lion-cub, and then that's it. Snap. Caught out. Which means that if I leave while she's sleeping peacefully, she will always wake up and spend the next hour or so pacing around the house shouting at her darling daddy, demanding my swift return. Which in turn means that I should NOT try and run errands while she naps, because then her nap is ruined for the day. But you know what? I'm ok with not slipping out secretly. If I have to leave her, I try to make it a time when she is happy, well-fed and generally busy... but I don't hope that her play will keep her distracted. I usually walk up to her, or call her name out, and when she looks up at me, her head cocked to one side sparrow-like, I say to her: "hey FR, mama's just going to go out and do some jobs, nana's here now and she's the boss, ok? I'll be right back in a little while, I love you lots!" And if she starts to whimper or hold out her arms, then I go to her and pick her up and hug her really hard. And then I pass her to nana, or whoever is amazing enough to look after my children for me, or put her gently down at her game, wave goodbye, and leave. 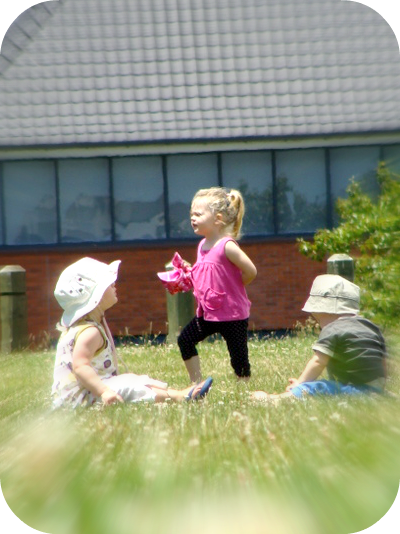 Does this technique cure Separation Anxiety? Nope. Does Separation Anxiety need curing? I don't think so. It's a perfectly normal part of our children's development, another notch on the chart as their little lines soar upwards, and it WILL NOT LAST FOREVER. I can say that as a fact, because I know it, because I've seen it. There WILL be a time, with all honesty I'm telling you, that you will feel slightly miffed at the surly 'bye', the lack of any head-movement from a book or screen, and you will feel ever so slightly disappointed that your absence causes no pain. And when my big girl was little, I could not see the future, I could not see hope, I could not see that there would ever be a time when she would not need me with every fibre in her strange little self, and I was completely overwhelmed.
But I've seen the future. It's a future where your children, my children, wave merrily out of car windows or at doors, confident in your steadfastness, your promised return. It's a future where they trust you, an ordinary person, so much that they can leave you and step forward, knowing that you will not let them down. You will ALWAYS be there.
So let's do away with curing Separation Anxiety shall we? Let's put the tricks, the magic-disappearing-acts away in a bag for now. They can be used now and then, when absolutely necessary. Let's learn how to bolster up our own confidence as caregivers, how to trust our own decisions of child-care and day-to-day work, so that we believe in what we are doing. So that we believe that leaving our children is necessary sometimes, and we believe it's for a good reason.
Don't hide from your baby, or run out the door in bare-feet, heels in hand, no, turn around, go back and say

I'd love to hear what your take on Separation Anxiety and Clingy Chimps is... how do you say goodbye to your little ones? Any advice, questions, or sob stories?
Hugs and kisses.
PS I am intending to add some links to articles I've found really helpful, but I'm also intending on folding the washing sometime and putting it away, soooo.... yeah....

Email ThisBlogThis!Share to TwitterShare to FacebookShare to Pinterest
Categories: Offspring

Ah such a good post! I too have done everything, but ended up with the "I'm going now and I will be back" scenario. It's hard though when you are in the thick of it isn't it.

Hi Rachel! My name is Heather and I wanted to know if you would be willing to answer my question I have about your blog! If you could email me at Lifesabanquet1(at)gmail(dot)com that would be great :-)