So I'm in a conundrum at the moment. I'm not very 'well', but I'm not very sick. Do I just ride it out? I've been to the doctor a few times. I've had some conflicting advice. I've had another doctor say one thing and then change his mind. He's not sure whether I'm sick enough to take action or not. I started come down with it a month ago -ish- but it's hard to tell, you know sometimes what is just a little ache starts aching a bit more, and then that headache that was coming or going... well, you THINK you've had it more each day but you can't be sure. It's like that. I definitely have days when I say, yes I'm sick. All the signs are there. I try and lie low, drink lots of fluids, try and squeeze in a nap, but it's hard to take time off to get better when you're a mum. The problem with my flu? It's mental. That's right, it's the invisible kind. I don't have a temperature, or a sore throat. My head doesn't hurt, although my bones do ache, deep inside, in a kind of timeless crunching way. Is it just a virus? Don't know.
The number of times I take my kids to the doctor with all the Symptoms of Something: sore throat, runny nose, rash, temp, poor appetite, and get sent home to just ride it out. It's just a virus. Of course, they say, bring them back in if it gets Worse. You know, like a More runny nose, or a Higher temperature. But what's the line before you treat the virus? At least with physiological illness, there are numbers, statistics. If their little bodies get above a certain Number on the thermometer. If their little snot trickles turn a Specific Shade, like a pantone colour. If they've thrown up a certain Number of times in the last so many hours. It's science.              Mental health, now that's not science. Yeah, they have some pop quizzes that they can loosely get a score from. They'll ask you how you feel, from one to ten: 'pick a number'. But it's hard to know what shows that I'm sick, and what's just a personality trait. And when all the various authorities decide that yes you're sick, but they're not going to change any medication or try something new, it's left to me to ride it out. To ask myself each day, what number am I feeling, from one to ten?
Yes there are signs, but the signs of wellness and sickness can overlap. For example, one sign might be that I'm not making anything, creating anything, not feeling inspired. However, one day this last week I was on crafty fire, I made and created, I was inspired. But it didn't feel super-healthy. It felt like a coping mechanism, a way to ignore my children perhaps, or a vain effort to validate my reasons for staying home, or a way to avoid thinking anything deep. It was a Good day, but I was still sick. I know that other people can't usually tell the difference(my husband definitely can, but hey, the man cooks my meals for me and sleeps in the same bed as me)(oh crap, I haven't changed the sheets for ages! Bad housewife!), but you'd think that I'd be able to tell the difference, right? Wrongo.
Example:
In which of these photos am I sick?
Photo one: 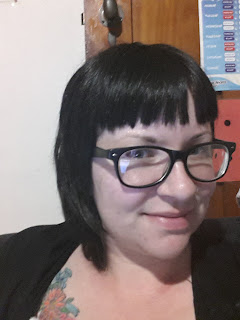 maybe it's this one... I'm smiling, but not with my eyes, and my head is kinda pointing down and to the left... hmmm... 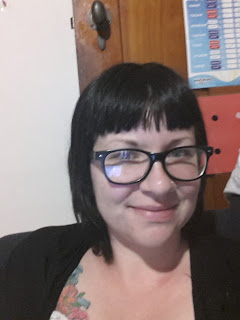 Or maybe it's this one. I appear to be genuinely smiling, but slightly distant, distracted... tricky, tricky...

Answer? BOTH OF THEM, but on a good day. See? Sneaky ay!
So the question is, do I try to get better, or do I just wait and see. Maybe this is as good as it gets right now. At what point does one decide that I'm genuinely sick enough to 'need help'? At what point do I cross the line from struggling-but-coping to struggling-and-not-coping?
And is it ok to actually kinda enjoy the ride that I'm on, to embrace this feeling of rawness, of the kind of low-level-ire that comes from being really honest with myself; whether that ire is directed at my own failings, or what I see happening in my community, in society's failings. Maybe it's good that there are people like me, feeling like this, because we want something to change. We're not content with the State of Things. We want to push, to annoy, to question, to rant, to cry a bit. We want to change your mind about things.
So maybe hold off the 'Get Well Soon' cards, because I have to confess, in a twisted sort of inverse way, I kinda like things like this.
Posted by Rachel Osborne at 3:50 PM

Email ThisBlogThis!Share to TwitterShare to FacebookShare to Pinterest
Categories: Crazy

Doesn't sound ideal but good to hear you're feeling ok about it!

I get that. I am feeling less than well but not unwell. Part of it is being honest with myself and my situation and I actually think that it good. Happy clappy is not wellness if it means denial. And I do think some of us are like barometers of the state of things around us and we need to be the squeaky wheel who doesn't just smile and ignore that itch that can't be scratched that things are out of wack somehow.